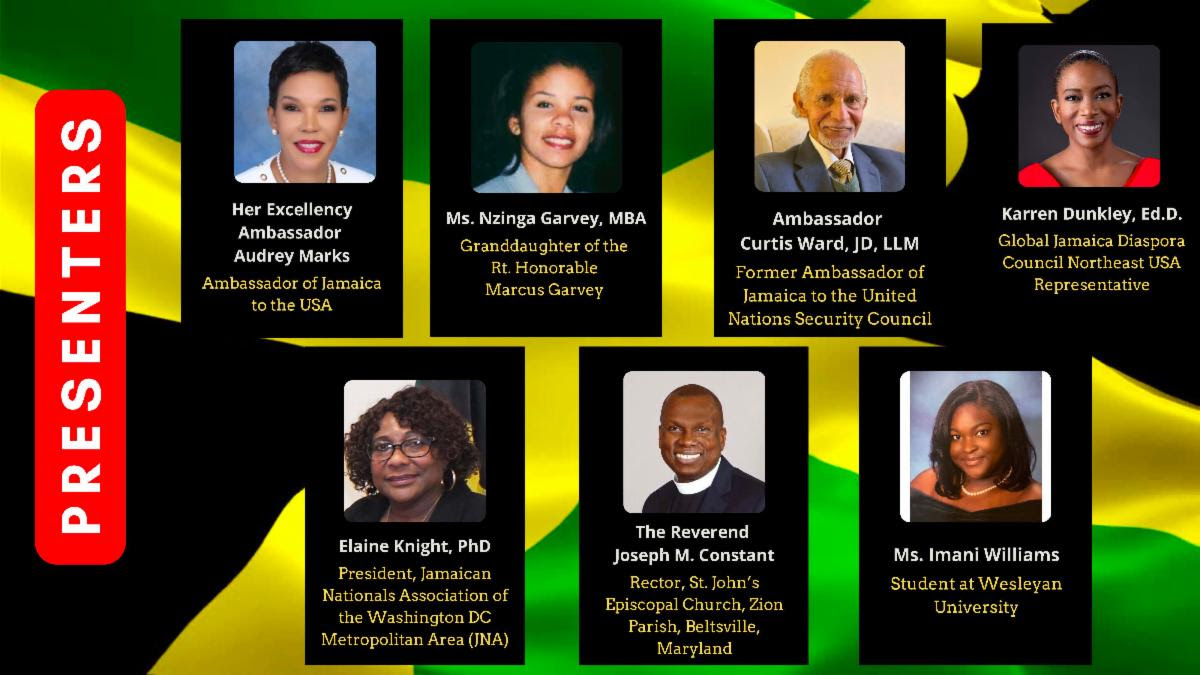 The Black History Month Fireside Chat was held virtually via Zoom on Sunday, February 20, 2022, at 4:00 p.m. EST to commemorate the global initiative to exonerate the Rt. Honorable Marcus Garvey (Justice4Garvey.org). We asked people around the world to support the mission of petitioning President Joseph Biden to grant a posthumous exoneration to legendary human rights icon, The Rt. Honorable Marcus Garvey, for his unjust prosecution and imprisonment in 1925. Marcus Garvey was unjustly persecuted and imprisoned for crimes that he did not commit. Since 1925, thousands of people have supported efforts for his exoneration. This coordinated global effort was led by the Caribbean-American Political Action Committee (C-PAC) with the full support of Dr. Julius Garvey, Marcus Garvey’s only surviving child. The petition to the President called on supporters to submit 100,000 signatures within 30 days; the clock started on February 1, 2022, and ended on March 2, 2022.
Ms. Nzinga Garvey, Granddaughter of the Rt. Honorable Marcus Garvey and Ambassador Curtis Ward, Former Ambassador of Jamaica to the United Nations Security Council, keynoted a Black History Month Fireside Chat shining the spotlight on “The Contributions of the Rt. Honorable Marcus Garvey to our World with Focus on Posthumous Exoneration.” Ms. Garvey’s delivery of her powerful message about her grandfather, The Rt. Honorable Marcus Garvey, grandmother, Amy Jacques Garvey, and father, Dr. Julius Garvey, O.J., was passionate and emotional. Ambassador Ward offered a powerful message about The Rt. Honorable Marcus Garvey.
Ms. Imani Williams, a student at Wesleyan University, presented focused questions to Ms. Garvey and Ambassador Ward about Marcus Garvey during the event.
Reverend Joseph M. Constant, Rector, St. John’s Episcopal Church, Beltsville, Maryland, gave the invocation. The delivery of his powerful and inspirational invocation brought the positive energy flowing throughout the event that certainly set the tone for our Black History Month Virtual Fireside Chat. We thank Reverend Constant for his spiritual guidance and leadership and for his support of the Caribbean Diaspora locally and in Haiti.
Her Excellency Ambassador Audrey P. Marks, Ambassador of Jamaica to the USA gave remarks. Ambassador Marks indicated that The Governor-General, Sir Patrick Allen, through the Government of Jamaica will be stepping up diplomatic efforts on this global initiative to clear the name of the country’s first national hero to grant a posthumous exoneration to the Rt. Honorable Marcus Garvey. In addition, Ambassador Marks stated that this year, 2022, highlights three important milestones:
Dr. Karren Dunkley, Global Jamaica Diaspora Northeast USA Representative, was the quintessential moderator that upheld the high expectations for the Fireside Chat.
One of our special guests was Ambassador Dr. Attalah Shabaaz, Ambassador-at-Large to Belize and daughter of Dr. Betty Shabaaz and Malcolm X Shabazz spoke about the friendship of both families. Malcolm X, Civil Rights Leader was assassinated on February 21, 1965, at the Audubon Ballroom, Harlem, New York.
The attendees including dignitaries, educators, and students were engaging. The audience described feeling: “inspired; motivated; positively overwhelmed; energized; grateful; enjoying the session, and learning a lot.”
The presenters received certificates of appreciation from H.E. Audrey Marks, Ambassador of Jamaica to the USA. Students who attended received a certificate of attendance. A Marcus Garvey print was presented to Ambassador Marks at the Embassy by Ms. Jennifer Asher, JNA’s Past President and Student Outreach and Educational Support (SOES) Committee Chair.
We thank the speakers, our moderator, and all participants for their expertise in leading an informative and enlightening discussion.
Our gratitude is extended to every news and media outlet that raised awareness and promoted this event.
Many thanks for taking the time to celebrate this historic Black History Month event and to all hands involved in doing the outstanding behind-the-scenes work that resulted in a successful and memorable event!!
“A people without the knowledge of their past history, origin and culture is like a tree without roots.” – Marcus Garvey
The Jamaican Nationals Association (JNA) of the Washington, DC Metropolitan Area, through the leadership of the Jamaican Nationals Association of the Washington Metropolitan Area (JNA) President, Dr. Elaine Knight, and Vice President, Rev. Dr. Noel Godfrey, hosted this Fireside Chat. The Caribbean-American Political Action Committee (C-PAC), the Global Jamaica Diaspora Council Northeast USA, Jamaican Association of Maryland (JAM), and the Montgomery County Executive’s Caribbean American Advisory Group (CAAG) have collaborated with JNA on this significant event.

A Symposium on Franklin W. Knight