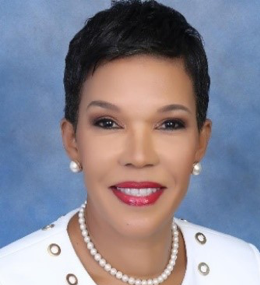 H. E. Audrey P. Marks is Jamaica’s thirteenth Ambassador to the United States of America and the Permanent Representative of Jamaica to the Organization of American States (OAS).
On September 12, 2016, Ambassador Marks assumed ambassadorial duties at the Embassy in Washington, D.C. She served in the same capacity from 2010 to 2012 and made history by being the first Jamaican female Ambassador to the USA, and the first to be assigned to the same post twice.
Prior to assuming her Ambassadorial role, Ambassador Marks founded Paymaster (Jamaica) Limited, an online paymaster system that is the first multi-transaction agency in the Caribbean that she conceptualized and started in 1997. A serial entrepreneur, Ambassador Marks started and operated six previous businesses, including a 100-acre banana exporting farm, a transportation company, and a real estate sales and development company. Ambassador Marks also operated a Venture Capital Company with diverse investments, including manufacturing, travel, and entertainment.
Ambassador Marks has served on the board of directors for several private and public sectors and has held positions as Chair of the Tourism Product Development Company (TPDCo) and Director of the Board of RBTT Securities Jamaica Limited. Ambassador Marks holds the distinction of being the first female President of the American Chamber of Commerce of Jamaica (AMCHAM), an organization that promotes investment and trade between the United States and Jamaica. Notably, Ambassador Marks is the recipient of numerous citations and recognition from her peers and various organizations for her pioneering work, entrepreneurial endeavors, and commitment to social causes.
Ambassador Audrey Marks holds a Bachelor’s and Master’s degree in Business Administration from the University of the West Indies, Mona, Jamaica, and Nova University, Florida, USA, respectively.
She also has the honor of being the first female President of the American Chamber of Commerce of Jamaica- an organization that encourages investment and trade between the United States and Jamaica.
Her exquisite experience in business and social engagement is recognized through awards like the Florida International University Business Leader of the Year Award in 2003 and 2010. She is married to Jassel Dunstan and they have two daughters – Morgan and Madison. She enjoys playing golf, mentoring young adults, and spending time with family.

Judge Tanya Chutkan was appointed to the United States District Court for the District of Columbia in June 2014. Born in Kingston, Jamaica, she received her B.A. in Economics from George Washington University and her J.D. from the University of Pennsylvania Law School, where she was an Associate Editor of the Law Review and a Legal Writing Fellow.

After law school, Chutkan worked in private practice for three years before joining the District of Columbia Public Defender Service (“PDS”), where she served as a trial attorney and supervisor. During her tenure at PDS, Chutkan argued several appellate cases and tried over 30 cases, including numerous felony matters. A decade later, Chutkan joined Boies, Schiller, & Flexner LLP to focus on litigation and white-collar criminal defense. During her 12-year tenure at the firm, Chutkan’s clients included antitrust class action plaintiffs and individual and corporate defendants involved in complex state and federal litigation.

On December 19, 2013, President Barack Obama nominated Chutkan to serve as a United States District Judge of the United States District Court for the District of Columbia. On June 4, 2014, the United States Senate voted in favor of final confirmation by a vote of 95–0 and Judge Tanya Chutkan received her judicial commission on June 5, 2014. Judge Chutkan is a frequent lecturer on trial techniques and has served as a faculty member at the Harvard Law School Trial Advocacy Workshop.

She joined UM Capital Region Health in 2013 and previously served in a dual capacity as Vice President of Medical Affairs and Interim President for UM Laurel Regional Hospital. She remains a part of UM Capital Region Health executive leadership team to fulfill the vision of improving the health and wellness of residents in Prince George’s County and the surrounding area.

Dr. Hall, as site executive for the UM Laurel Medical Center has oversight of the 145 Bed Laurel 345 Covid Alternative Care Site for the state of Maryland since April 2020. These temporary beds opened are in response to the surge of Covid-19 patients and the capacity to have a specialized facility with expertise to accept patients throughout the state for hospital care. Prior to joining UM Capital Region Health, Dr. Hall was the Chief Medical Officer (CMO) for University of Maryland Medical System’s Chronic Care and Rehabilitation hospital. She is board-certified in Physical Medicine and Rehabilitation.

Dr. Hall has more than 20 years’ experience in healthcare leadership roles, including private practice and several medical directorships. She also has a long history of service in Maryland‘s health policy arena, including health advocacy and regulatory oversight. She was a Commissioner on the Health Services and Cost Review Commission (HSCRC) from 2002 to 2009. She served as Chair of the HSCRC’s Quality-Based Reimbursement Initiative for Maryland from 2000 to 2009. In addition, she served on the Maryland State Brain Injury Advisory Board and is President of Maryland State National Medical Association.

Dr. Hall received her Doctor of Medicine degree from the University of Medicine and Dentistry of New Jersey, Robert Wood Johnson Medical School. She did her residency and served as Chief Resident in Physical Medicine & Rehabilitation at the JFK Johnson Rehabilitation Institute in Edison, NJ. She is married to Dr. Maurice Miles who has a dental practice in Bowie and a teenage daughter in high school.

Dr. Hall received the Governor General’s Jamaica Diaspora Achievement Award (GGAA) for her contribution to medicine. The award was presented at a ceremony held at Jamaica’s Embassy on December 17, 2021, as part of Jamaica’s Annual National Honors and Awards program held in October 2021.

Alia Shanee Atkinson, OD (born 11 December 1988) is a retired Jamaican swimmer and five-time Olympian. Atkinson calls Roehampton, Jamaica her hometown. In 2000, her family relocated to Florida in the United States.

At three years of age, Atkinson started swimming. When she was 13 years old, Atkinson decided to focus her swimming on breaststroke. Before then she swam mostly freestyle and butterfly. She has been coached by Chris Anderson since 2001. Atkinson mostly trains with the South Florida Aquatic Club swim team in Pembroke Pines, Florida in an Olympic-size swimming pool.

“To place Jamaica on the world map of swimming; to agitate for the improvement of the infrastructural support for swimming in Jamaica so as to be able to take it to the next level; and to realize my full potential for myself, my parents, and my country.”

In college, Atkinson majored in Psychology, earning her Bachelor of Science degree from Texas A&M University in 2010.

Cicely Williams, born in Kew Park, Darliston, Westmoreland, is a Jamaican pioneer in the field of pediatrics. According to Dr. Rebecca Tortello, in her 2002 article on Cicely published in The Jamaica Gleaner, “She is directly responsible for initiating a worldwide campaign against the use of unsuitable sweetened condensed milk as a substitute for breastmilk and for the diagnosis of the dreaded childhood nutritional disease, kwashiorkor. “ As a physician, Dr. Williams specialized in nutrition, pediatrics and maternal care, but naturally, she was most noted for her discovery of the child malnutrition syndrome, kwashiorkor.

Dr. Williams was born in Westmoreland in1893 and was one of the first women to be admitted to study medicine at the University of Oxford in England due to the scarcity of male students caused by the war. Reportedly, at age 9, Dr. Williams’ father told her “You’ll never find a husband, my dear. You had better go to Oxford when you are old enough and learn to be a lady doctor.” After her father died, Dr. Williams took his advice and started first aid and nursing classes during the outbreak of World War 1 in 1914.

“In 1929, Colonial Medical Services sent her to work in the Gold Coast (present-day Ghana). While working on the West African coast, she noticed a large number of hypo-pigmented children with swollen bellies and legs, and also that there was a higher mortality rate among toddlers than newborns. The toddlers were usually treated for ‘vitamin deficiency’. Unfortunately, many of them died. Dr. Williams investigated and discovered kwashiorkor – an acute form of malnutrition resulting from a lack of protein. To treat the condition, she recommended that parents feed their children a high protein diet.

“Throughout her career, Dr. Williams worked in several countries as doctor, lecturer and researcher, sharing her findings in medical journals. She was the first woman to be put in charge of all maternity and child welfare services in Malaya. In 1948, she was appointed adviser for maternal and child health at the World Health Organization (WHO). After her retirement in 1951, she continued to work as an international spokesperson on issues of maternal and child health care. In January 1976, the Government of Jamaica conferred on her the national honor, the Order of Merit.”